Life's a party (for some) 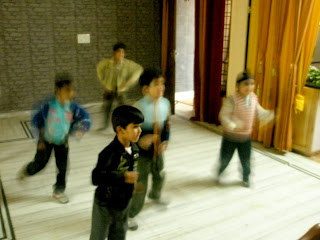 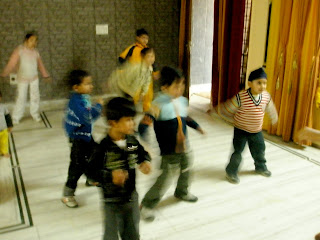 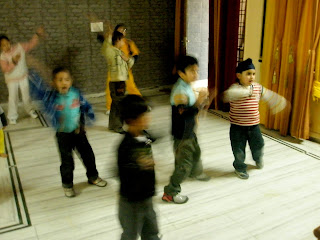 In a land of contrast, we have been exposed to extreme poverty and extreme wealth — from beggars banging on the car window to posh homes filled with chandeliers. We've left the Megapolis Rotary Club and are now with the Gurgaon Rotary Club. Gurgaon is considered the suburbs of Delhi, and there's plenty of industry and construction here.

Tours during the past few days include:

• Rotary Public School, which serves students from ages 2 to 18. The school started in 1981 in a small building with four rooms. It's now housed on an impressive five-acre campus. Some things that stood out to me are the bulletin boards filled with inspirational quotes and the fact that yoga is part of the school's curriculum.

• Ambience Mall, the largest shopping mall in India. A major difference between this mall and those in the states is you have to pay to park and security guards search your trunk for bombs.

• Factories that make rubber, fabric (buyers include Calvin Klein) and auto parts (supplying companies such as BMW and Toyota). These tours created a much greater awareness of where products we purchase in the U.S. come from. 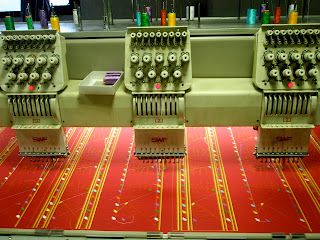 My first host family is in the tile and mosaic business, while my new family has a variety of endeavors. I discovered one of them while having a conversation about Hinduism in my bedroom. From the living room next door I could hear loud dance music all of a sudden. As it turns out, my new house is full of dance instructors. Children come after school to learn dance on their large marble floor (see photos above).

Today we drove to what seemed like the Tuscany of India, where we attended a catered party at a large villa. There was drinking, gambling, kite flying, cricket playing and lots of food. As a vegetarian, one of the best things about India is the abundance of tasty meat-free food. Check out these kabobs made with paneer (cheese) and peppers. 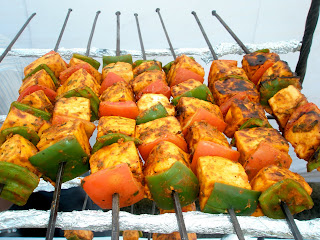 Posted by The Morris Family at 10:26 AM No comments:

Wednesday was our most intense day yet as we visited a cancer hospital and an orphanage.

We met with a doctor who discussed with us the 200-bed hospital. Patients from throughout India and other countries, such as Afghanistan or Nepal, come to the center to receive free care. There is a 10 to 15 day waiting period for inpatient care.

The Rotary Cancer Center is funded by the government and supplemented by Rotary and other groups. The hospital is part of a larger complex that serves a staggering 10,000 patients a day. There is a constant stream of people filling the crowded waiting rooms. We received a tour of the hospital, which was to say the least, an eye-opener.

Afterwards, we went to Hauz Khas Village and toured old ruins before having lunch at a restaurant in a lush park. Up next up was an orphanage of Human Care International, which hit us like a ton of bricks. 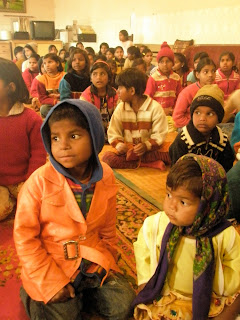 We were greeted by a saint-like man dressed in all white who gave us a tour of the complex. Many of the more than 150 kids who live there are children of lepers. It was explained to us that there was no hope for these children as no school would accept them for fear of being infected with the disease.

The orphanage gives these children a place to stay and study while keeping them off the streets. The center also serves women who were abused and left on the roadside along with those who are HIV positive. Additionally, there's a home for the mentally challenged and the unwanted elderly.

Right now they are raising money to build a hospital next to the orphanage. We toured the construction of the hospital, which like most everything else around here is done by hand.

During a ceremony held with all the children we were given the best chai I've tasted so far along with a cookie and another flower garland. Together we sang "Twinkle, Twinkle Little Star" and "Mary had a Little Lamb." We were all deeply touched by this place. 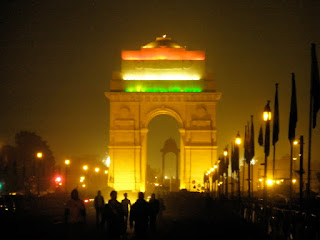 In the evening, we visited India Gate (above) and the Rashtrapati Bhavan, which was still all lit up in honor of Republic Day.
Posted by The Morris Family at 7:20 PM 1 comment:

So we made it after nearly 30 hours of travel. We flew from Modesto to San Francisco to New Jersey and then all the way to New Delhi. We spent the first day meeting many wonderful people and eating way too much, including a banquet-style dinner.

On Tuesday, we celebrated the 60th annual Republic Day, which honors the day India got its own constitution. It's one of three national holidays (along with Independence Day on Aug. 15 and Mahatma Gandhi's birthday on Oct. 2).

As New Delhi is the national capital, we attended the Republic Day Parade in the morning. No pictures were taken because we couldn't bring anything into the parade except our passports and our invitations from the Ministry of Defense. Getting there, we drove in the thick morning fog, dodging other vehicles and cows walking the roadways.

Once we were seated along the parade route, patriotic poems were read and out of the rolling fog emerged horses, tanks, marching bands, decorated camels, colorful dancers, roaring airplanes and elaborate floats celebrating India's different states. The fog, along with seeing things like a tuba player riding a camel, gave the parade a surreal, dream-like quality.

After the parade, we went to eat southern Indian cuisine before visiting two of the five schools the Rotary Club of Megapolis is running in the outskirts of Delhi. The program — called Koshish, the Hindi word for "an attempt" — focuses on teaching children ages 3 to 6 basic skills so they develop an interest in learning and continue on with public education. 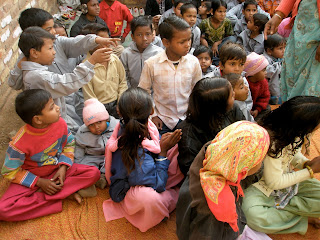 The school serves children of migrant laborers who otherwise would need to leave their young children at home while they go out to work. Teachers at the schools must actually go to the homes and bring the children to their modest classrooms.

The students, dressed in uniform jumpsuits, sang to us their national anthem along with other songs and performed Bollywood-style dances. One of the cutest things was when some of the little kids got up to recite nursery rhymes in English, such as "one, two, buckle my shoe" and "rain, rain, go away."

During a welcoming ceremony, they put a red dot on our forehead along with some rice overtop so that we "may never know hunger" along with placing a garland of flowers around our necks. This was done at each of the schools as well as an Indian flag ceremony, where we got to help display the flag on Republic Day. We were treated like very special guests and we all found the children really sweet and the whole experience very touching.

As if the day wasn't busy enough, I was also taken to a party where I sipped scotch with older Indian gentlemen before going to a Hare Krishna temple and then to another late-night dinner party. An Indian Rotarian told me, "the more we love you, the more we feed you." Needless to say, we feel very loved. 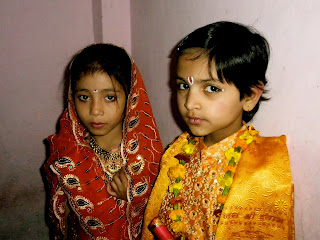 So we have been back from the East Coast for about two weeks now, and last week Amber celebrated her 27th birthday. It was a three-day event filled with lots of oolong tea (her favorite), Yosemite, a shopping spree in Fresno, an ice skating party in Long Barn and, of course, plenty of cake and ice cream.

Early Saturday, I'm off to India for a month as part of Rotary International's Group Study Exchange program. I will be traveling with other young professionals from several California counties to New Delhi as part of this cultural exchange. We will all be learning about how our jobs are done over in India (in my case newspapers) along with doing touristy things such as visiting the Taj Mahal.

Sadly, Amber and Ediza can't go, but I've promised them lots of fun sparkly presents. Well, I must get back to packing. Look for posts from India soon.
Posted by The Morris Family at 4:57 PM No comments: 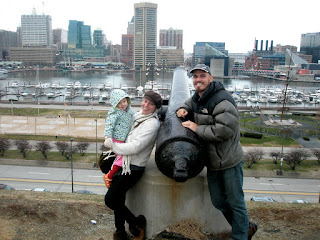 We started the New Year off with a trip to Baltimore to visit my friend who lives in the Federal Hill area of the city (where the above photo was taken). We all walked down to the Inner Harbor for dinner and a trip to the Maryland Science Center. 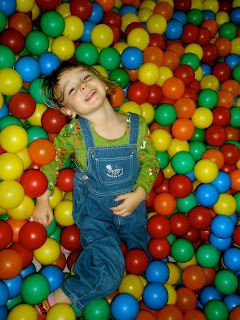 The next day we headed back up to Pennsylvania so Ediza could have some fun in a ball pit. She's been in search for one of these since New Zealand. 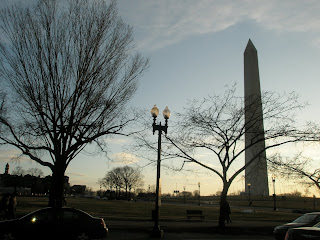 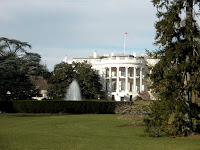 And yesterday we braved freezing weather and stinging wind to walk around the National Mall in Washington D.C. Amber and Ediza had never been there before. I think it's important that they (and all Americans) see it. We did the best we could given the weather. All major attractions — the Washington Monument, White House and Lincoln Memorial — were visited. Ediza even got to witness her first official protest!
Posted by The Morris Family at 5:55 PM 1 comment: