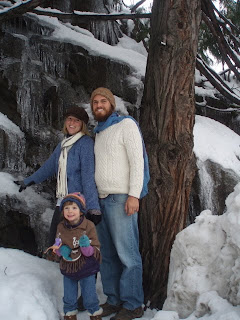 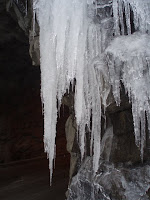 After almost three months, we're getting more and more settled into our new home. We still don't have the Internet and we don't have any plans to get it installed (as usual, we don't have a television either). Surprisingly, we've been getting by just fine without having the Internet at home (after all, it's available just about everywhere else). Instead of being a distraction at home, we've found more time to read books, practice yoga, and just hang out.

Speaking of going online, please check out my new L.A. Times travel article, "Where to stay when visiting Yosemite."

Above is a family pic of us in Yosemite that was taken by my parents when they were visiting last month. In addition to ice skating in Yosemite Valley, we went wine tasting in Murphys (we highly recommend Presidents Wine Weekend) and worked on some projects around the house. Below is a picture of Amber in the backyard with our rooster (named "Mike" by Ediza). 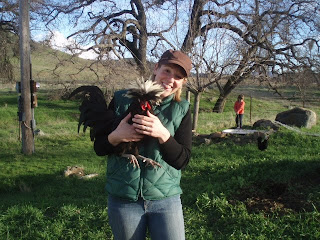 Amber had her first roller derby bout of the 2011 season this past weekend, where she made her debut as a jammer. Her team, the High Country Hellcats, beat the Monterey Bay Derby Dames before singing karaoke with them later at the after party. Next month they travel up to Redding to take on the Angry Beavers!

Well, spring has finally arrived although it feels more like the dead of winter with cold temps, strong winds, rain and even snow. Hopefully March showers will bring April flowers.
Posted by The Morris Family at 2:09 PM No comments: