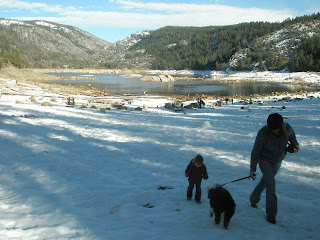 Last week we tried this cleanse where you can't have any sugar, caffeine, alcohol, gluten or animal products (including eggs, cheese and milk). This week we made up for lost time, eating Ben & Jerry's ice cream for Amber's 26th birthday on Wednesday, and as I type this I'm nibbling on a chocolate truffle.

Following our hiatus, we returned to Starbucks yesterday before driving up to Pinecrest Lake. We took Maggie to the lake for her first big outing. Some people, including Amber and Ediza, attempted sledding despite the lack of snow. Lately, it has been feeling more like June than January around here.

We plan to take advantage of the weather tomorrow and return to the old railroad grade where I started my training a year ago for the Great Wall Marathon. Come to think of it, I haven't ran since the marathon eight months ago:)
Posted by The Morris Family at 3:32 PM 1 comment: 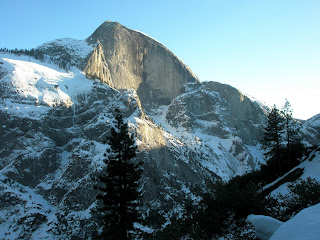 To wrap up our adventurous 2008 we decided to do something that epitomizes adventure: A 20 mile (roundtrip) snowshoe hike up steep switchbacks to a remote cabin in Yosemite National Park.

The trek was quite challenging, especially with Ediza on my back. After hiking all afternoon (not to mention hours in the dark) we finally made it to Snow Creek Cabin. Once we made our way inside, we entered a tiny, dimly-lit room that was filled with people sitting around a wood-burning stove. We were then handed a plate of spicy veggie stir-fry and a drink made with lemonade, vodka and, of course, snow.

In Amber's backpack, wrapped up in a sleeping bag, was a bottle of pineau -- a mixture of Cognac and grape juice -- that we were given as a gift while staying in southwest France. At midnight, a bottle of champagne was passed around. We later cuddled underneath a table in the main room and fell asleep. This was definitely one of the more memorable New Year's Eve parties I've been to. 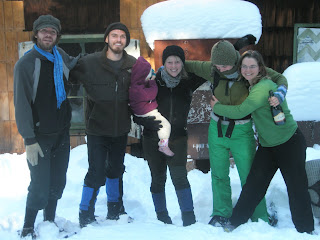 The next morning some of us made our way back down the mountain, while others stayed at the cabin for more snowshoeing and cross-country skiing. It was incredible to experience some of the rich history of Snow Creek Cabin, which was built in 1929 and restored in 2006. 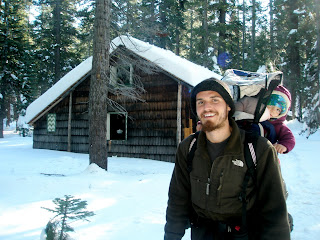 In unrelated New Year's news, we were lucky enough to be included in the 2009 calendar of the New Zealand Llama Association. Below is the calendar's amazing cover. 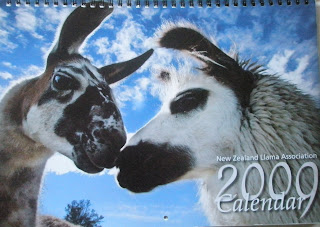 The month of February was dedicated to Ediza, who is pictured trying to halter the llama that was named after her at Rangemore Llama Farm in Kerikeri. 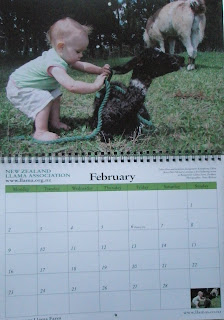 A family photo of us at Llama Lookout in Governors Bay was featured for the month of May. 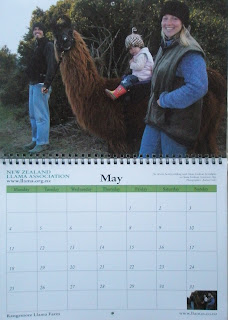 Aside from our photos, what I like about this calendar is that you learn new holidays -- like Feb. 6 is Waitangi Day and June 1 is the Queen's birthday.