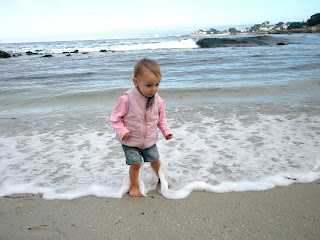 We traded in Sonora's heat for the chilly California coast this weekend. On Friday we drove down to Monterey and stayed with Maggy (one of the women we camped with at Strawberry). In an attempt to find her house we ended up at Lovers Point in nearby Pacific Grove. 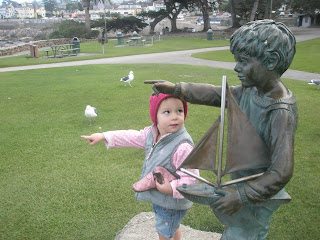 After playing in the waves there, Ediza checked out this statue of a little boy and his toy sailboat. 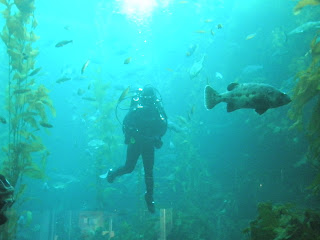 The next morning we toured the world famous Monterey Bay Aquarium, where we saw sharks, sea otters, penguins and these mesmerizing jellyfish. Like a quote on the wall read: "The sea is as near as we come to another world." 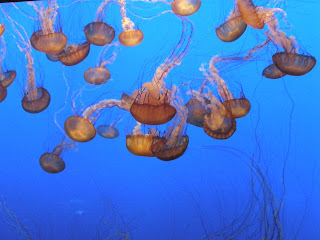 Later that day we took Ediza to Dennis the Menace Park, a popular playground that both kids and their parents seem to enjoy. 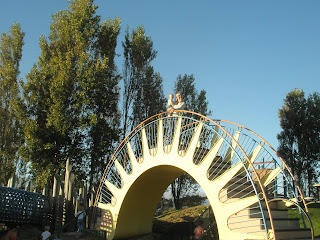 On Sunday we drove down the coast to Point Lobos State Reserve, which bills itself as the greatest meeting of land and water in the world. While I wouldn't go that far, it is pretty spectacular. We walked sandy paths along rocky cliff tops, watching waves crash below and pelicans fly above in unison. Here I am pointing out some noisy sea lions to Ediza. 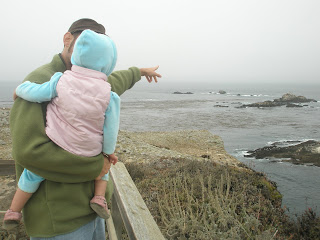 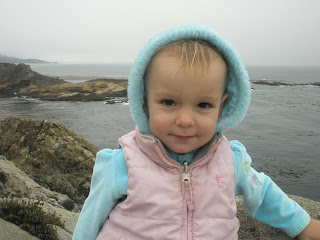 Hours after eating a picnic lunch there we returned to Monterey to meet up with Maggy and Karen (the other lady we camped with) for dinner at a local Indian restaurant. After eating a savory meal of samosas and curries we smoked mango-flavored tobacco out of a hookah. Only in California could you have a weekend like this. 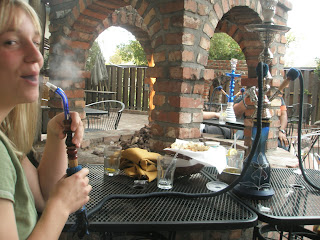 Email ThisBlogThis!Share to TwitterShare to FacebookShare to Pinterest
Labels: Coast

We just returned from another inspiring Strawberry Music Festival. At the four-day festival, held at Camp Mather near Yosemite, we camped with two fun women from Monterey. We hung a large, colorful paper mache butterfly above our tent. In the photo below, Amber and Ediza are releasing a real butterfly from inside the tent. 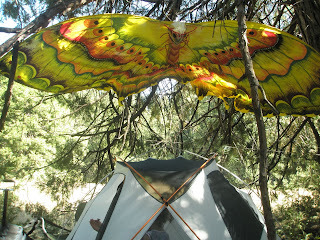 Strawberry has a very relaxed, family-oriented atmosphere. Kids are pulled around in wagons, there's outdoor yoga classes by the lake, and of course there's nonstop music -- both on stage and off. Most of the festival's music is bluegrass and folk based, however, there's usually an eclectic lineup. Here's Ediza dancing in the Music Meadow to Chic Gamine, a talented Canadian group who sing some songs in French and even Spanish. 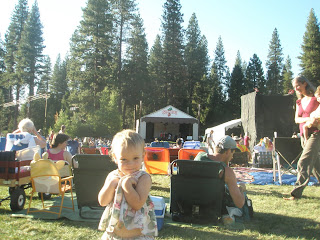 Amber got to do some crazy dancing with two of her longtime friends, while I got to have some long overdue conversations with people I haven't seen since before our trip. Our around-the-world adventure, obviously, was a main topic of discussion. In general, the festival has a very cultured, global feel to it. Fittingly, here's a flag of the earth hanging from some tall pines. 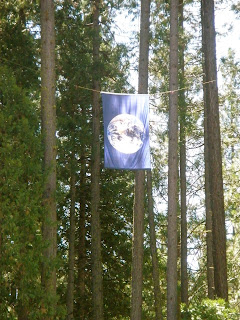 Posted by The Morris Family at 5:41 PM No comments: