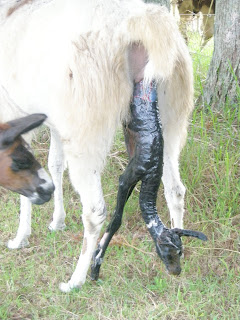 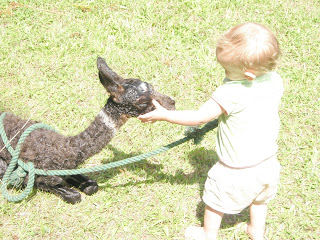 Xquisite Symphony (mom) and Pirate Ring (dad) are the proud parents of Kakophony Ediza, born about noon on Friday. That's right, the cria (baby llama) was named, at least partially, after little Ediza Rose. The cria weighed 11 kilograms (that's about 24 pounds) and was up and running around in no time.

Aside from baby llamas, we took a stud male named Poetry to the beach yesterday. We have actually been visiting quite a few secret little bays during the past few days. Can you imagine, swimming in February?

When we took Poetry to the ocean, we walked up a steep path to a hillside monument commemorating the Rainbow Warrior -- the Greenpeace ship the French sunk in Auckland 23 years ago so that it wouldn't interfere with their nuclear testing. Two years later, the ship was brought to Matauri Bay, near where the monument now stands. Pictured with Poetry are Amber, Ediza and Tracy, a helper at the llama farm.

On the way back down we walked Poetry through a little cove where we came across a topless woman sunbathing. Needless to say she was shocked a llama had crashed her party. Poetry, putting on a good show, decided to sit down and have Amber pull him towards the water. 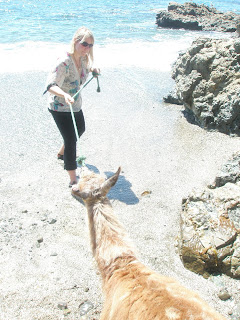 Today, at another beach, Amber made an elaborate sandcastle with a moat and everything. Not a bad way to spend a day you only get to live every four years.
Posted by The Morris Family at 12:07 AM 2 comments: 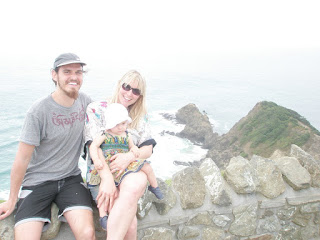 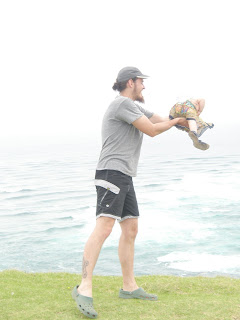 Ediza has been acting just too crazy lately so I decided to throw her off a cliff. Just joking.

Yesterday we visited Cape Reinga, the northern most tip of New Zealand. Cape Reinga -- where the Pacific Ocean and Tasman Sea meet -- is considered a sacred place to the native Maori people as they believe their souls leave from this point.

It's a very majestic place and was well worth the three-hour drive to the north to get there. The last 20 kilometers (they don't use miles here) of the drive was along a rough gravel road and we were dodging all of this construction equipment. Kind of crazy to be driving with a huge steamroller coming at you and no one directing you where to go. 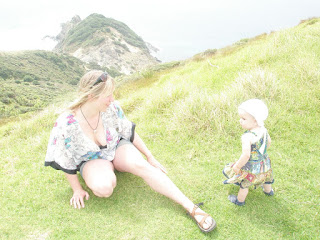 On the way back to the farm we stopped at Coopers Beach, a great little swimming spot with lots of colorful seashells mixed in with the sand. Ediza got to play with a puppy dog named Nigel before playing with seashells and taking a swim. 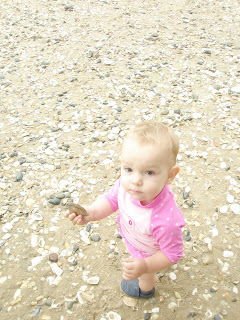 Posted by The Morris Family at 12:51 AM No comments: 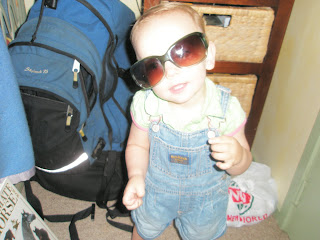 Ediza being a cool dude. 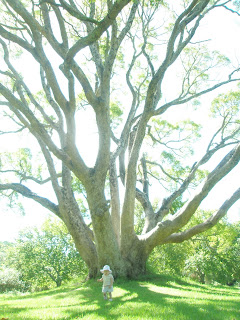 Ediza standing in front of a trippy tree. 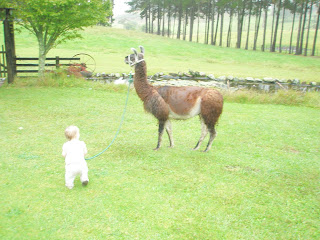 Ediza walking a llama at Rangemore Llama Farm in New Zealand.
Posted by The Morris Family at 12:41 AM 1 comment: 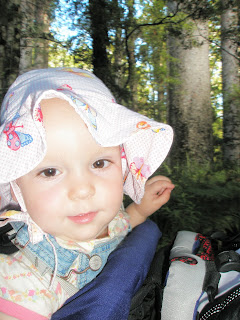 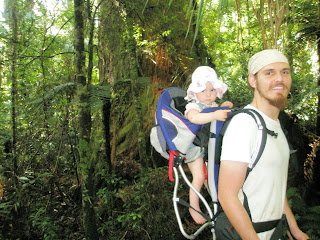 After more than two days of solid rain dumped about 10 inches here, we have been enjoying the New Zealand sunshine (with plenty of sunblock, of course, as the hole in the ozone layer sits just above NZ). The storm was so strong it caused some area roads to flood and made Amber's umbrella flip inside out several times.

Since drying out, Ediza Rose went on her first bush walk (see photos above) and has been running around the farm enjoying all the animals and fresh air. We have been doing some sightseeing drives -- one led us to a beautiful bay that had sailboats (one of the boats was named "Break Free").

We also found a great public park with a running trail leading to waterfalls. At the park, Ediza loves visiting and feeding the ducks, roosters, geese and seagulls (see photo below). I have started running some there, although I find it a bit difficult because of the heat and humidity. It's also been a challenge for me to learn to relax and realize that I don't have to go-go-go and do 50 million things at once. 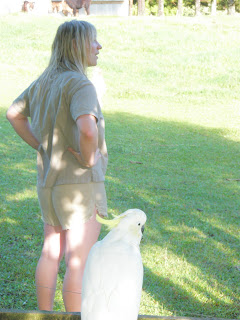 Amber, on the other hand, has been very relaxed. During the past two days, she's clipped the toe nails of the female llama herd and has the males left to do. She's been having lots (make that "heaps") of fun and looks forward to training three llamas in particular -- Coffee, Chocolate and Caramel.

We are adjusting quite well here, given all the changes. Summer is starting to wind down and the kids are going back to school. I'm continuing to stay in the left lane while driving (most of the time, anyway) and even routine things, like grocery shopping, are becoming these great new experiences. 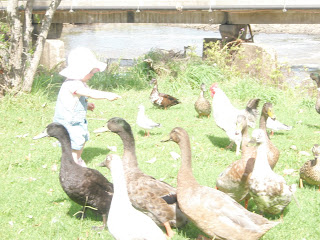 Out of the city 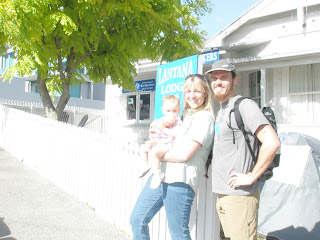 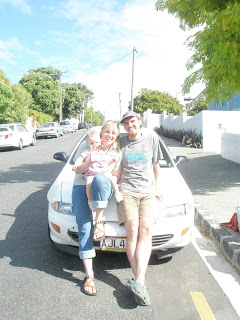 So we've made it out of Auckland and are now at our first llama farm, Rangemore Llama Farm (www.llamas.co.nz). It's actually owned by the president of the New Zealand Llama Association -- the one who put us in their newsletter.

We had a good time exploring Auckland (riding buses all over the city, walking the busy streets and eating lots of tasty ethnic food). I even managed to get a long run in. Above is a photo of us outside our hostel, an old house in an upscale part of the city known as Parnell. Below is a photo of Amber and Ediza in a park next to the hostel.

A big part of our exploring the city involved searching for a car to buy. We bought one yesterday at the backpackers car market, which is a place where travelers buy and sell cars and vans. We bought our car -- a 1996 white Toyota sedan -- from a Swiss guy, Mathias, who is flying back home today. He was very friendly and helped me get the hang of this whole driving on the opposite side of the road thing.

When driving, everything is opposite: the steering wheel is on the other side, the lights, the windshield wipers, everything is reverse. Combine that with driving in a hectic city and through these wild roundabouts and I think I did pretty well (even though I kept turning on the wipers instead of my blinkers).

We left Auckland later than planned because we had a mechanic do some work on the car. The drive to the farm was about four hours to the north. Kerikeri (the town) is at the northern end of the Bay of Islands and reminds us of Hawaii and other tropic locales. It is raining a lot here, although it's quite warm.

The farm we're staying at is very green and lush. It's surrounded by a river and there's plenty of outdoor activities nearby. They have about 50 llamas, a dog named Tess, some peacocks and a bunch of other animals, including a funny cockatoo that says things like, "hello darling."

Today is the birthday of Julie, the lady who owns the farm. Happy Birthday, Julie! 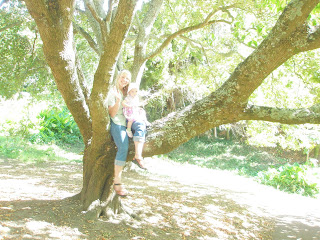 We arrived in Auckland yesterday and took a shuttle to our hostel, the Lantana Lodge. After resting we did some exploring of the city and found some yummy food. The best we can tell is that it's 21 hours ahead of the west coast here. Thankfully, we haven't really experienced much jet lag.

Traveling this far with a 16-month-old has been surprisingly not that bad. Sure you have to chase her around the airport and make sure she doesn't knock things off the shelves of the gift shops, but you also get to cut to the front of the long airport lines and everyone (especially old ladies) smile and talk with you.

These photos were taken in our room. Ediza, always full of energy, wasn't climbing up the walls -- she decided to go up the window. Haha. 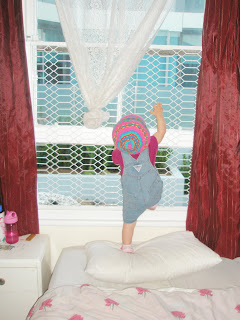 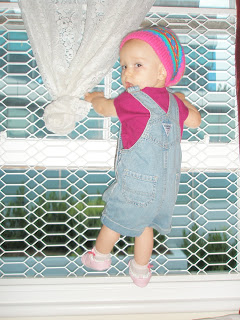 Posted by The Morris Family at 1:09 PM 2 comments:

We've made it to Fiji and have spent the morning in the airport. It's very hot here and the air is thick. Ediza Rose did great on the airplane. She slept most of the way as we left late Saturday night. It's now Monday morning here. Still haven't quite figured out all the time changes. We'll be boarding soon for another flight to Auckland. For now, we're hanging out and dancing to some local music...
Posted by The Morris Family at 11:02 AM 2 comments: 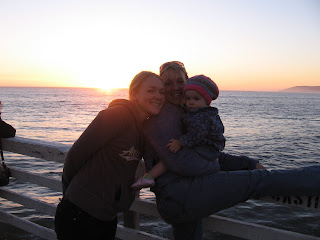 So we've left Sonora and are now on the road to LA. We're spending the night with Amber's sister and her boyfriend in Pismo Beach. Since arriving we've been to a park that acts as a butterfly sanctuary and we walked on a pier out over the Pacific Ocean. After running some errands tomorrow we plan to drive down the coast and fly out late in the evening. So far, so good.
Posted by The Morris Family at 7:37 PM No comments:

Email ThisBlogThis!Share to TwitterShare to FacebookShare to Pinterest
Labels: Preparation 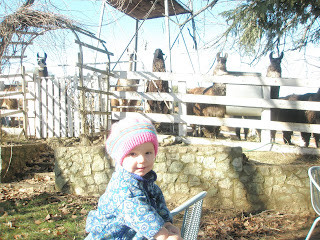 Ediza was playing in the backyard before we went to the trail today. She and mommy visited a horse at the trailhead before walking the old railroad grade in Tuolumne. For the first time since training for a marathon two years ago, I ran to the bottom and back to the top of the grade (a total of about 12 miles).

We are continuing to gear up for our big trip. In a week we'll be in LA getting ready to board a flight to Fiji.

Yesterday was my last day at work and I've been busy trying to hang out and say good-bye to everyone. I'm not complaining though as that means lots of eating out (everything from Indian to the Miner's Shack). Tonight we're going to Jenn's birthday celebration at The Old Stan.

In addition to packing, Amber prepared for the trip by getting her chakras cleansed last night:) 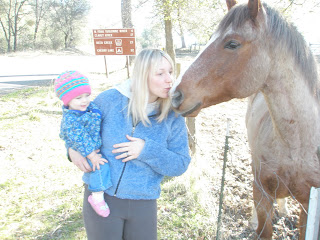