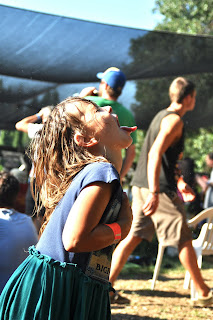 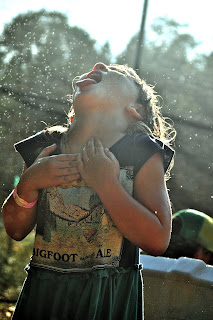 Wanted to share these fun pics of Ediza cooling off during a concert this summer at Mountain Sage in Groveland. The photos were taken by Emily Yates, who is the media director for an organization called Veteran Artists (www.veteranartists.org). She's also married to one of the members of Hot Buttered Rum (the band that was playing that evening).

Ediza has been staying wet this summer swimming at the pool in addition to doing gymnastics class, riding horses, painting pottery and playing with her new kitten (which we picked up a month ago at a moving sale in Twain Harte). She's getting ready to start kindergarten at the Sierra Waldorf School (www.sierrawaldorf.com) this coming week!

Also, wanted to post a link to my latest L.A. Times travel story, "Monterey's a family-friendly destination." We took a family trip to Monterey back in April (see earlier post below), but the story just ran a week ago. For those on Facebook, another link to check out is www.facebook.com/fundraising4antarctica (it now has enough "likes" to have its own site).

We're gearing up for the fall Strawberry Music Festival this coming week. Hot Buttered Rum is also playing there, but there won't be any misters for Ediza to play in:)

Posted by The Morris Family at 5:29 PM No comments: 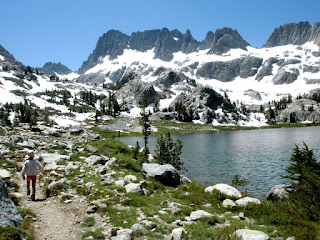 We recently returned from our 5th annual family hiking trip to Ediza's namesake — Lake Ediza. It was a much shorter trek than last summer, when we walked from Agnew Meadows near Mammoth Lakes to Tuolumne Meadows in Yosemite National Park. This time around we just hiked into Lake Ediza and then back out two days later.

What seemed like a simple trip was still quite involved. A week ago, we drove to Mammoth late at night and camped in the forest so that we were there early the next morning. We had to get a walk-in permit because all the reserved permits were booked when we wanted to go. I arrived at the permit station at 7 a.m. to wait in line until they opened an hour later only to get a number (I was second in line) to return back at 11 a.m. and get our permit for the next day. So we went back home, packed, got the llamas ready and drove back to Mammoth the following day.

Because of all this we started pretty late so we camped a little bit before Lake Ediza on our first night. Unfortunately, we were swarmed by mosquitoes there. Amber took this close-up of my face, and if you look carefully you'll see a mosquito sucking my blood next to my right eyebrow. 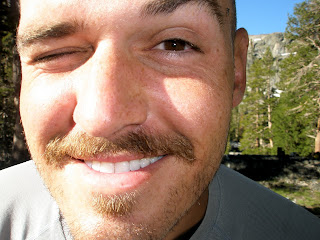 The next morning we finished the hike to Lake Ediza. The lake had by far the most snow we've seen in the past five years. As we approached the lake, Ediza rode Golden (which she did most of the hike) over a snowy patch. 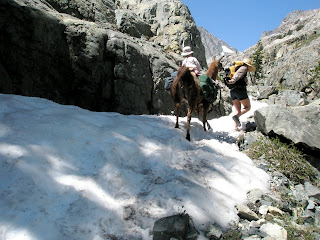 Once we arrived, Ediza was all smiles... 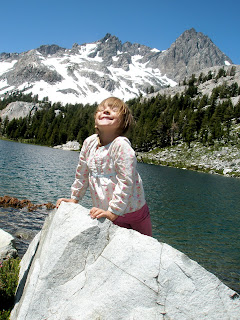 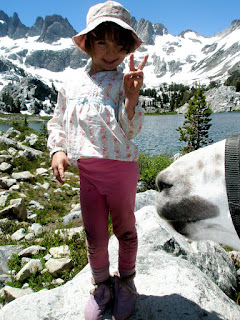 We still had more streams to cross until we got to our regular camping spot up above the lake. 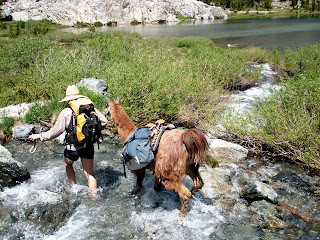 But it was well worth the effort after we arrived... 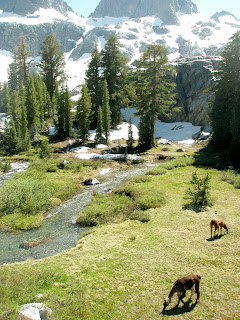 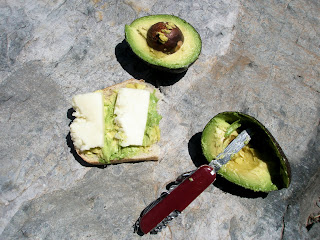 But the best part was probably how the weather was sunny, breezy and mosquito free! A highlight for me is always watching the twinkling stars in the crystal-clear sky.

Amber and Ediza enjoyed sledding on our sleeping mats. 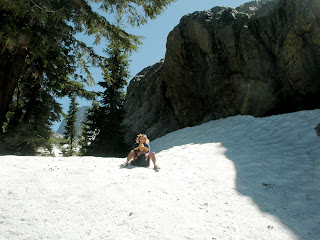 That night was so chilly that Ediza was able to eat some ice from a frozen stream the following morning. 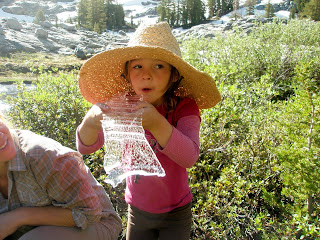 It's difficult to imagine that back in 2007, on our first family trip to Lake Ediza, she was just a little baby splashing in the water on the lake's sandy shore. Now, she's an adventurer climbing granite like a pro. Here she is at a spot near our campsite which she refers to as "Dream Mountain." 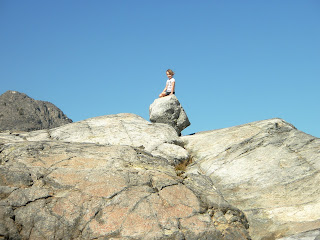 I can see why she named it that. The whole area around Lake Ediza is quite magical and dreamlike!
Posted by The Morris Family at 10:18 AM 1 comment: