Tahoe to Yosemite to Frogtown 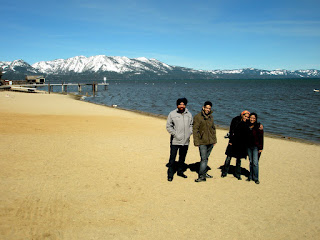 Here's the group from India at Lake Tahoe, where we attended a conference last weekend. They gave a presentation about India and themselves, while we gave one about our experiences in India. We were even talked into getting up in front of everyone and performing a Bollywood-style dance. They were bummed about not getting to leave the hotel so I snuck them out Sunday morning to go see the lake (where this photo was taken).

I also made it to Yosemite twice this week — once for work, the other to hike Yosemite Falls (up and down in less than three hours!) and then met up with the Indians for lunch at The Ahwahnee. Every season in the park is beautiful, but the rushing waterfalls in springtime make it even more special. 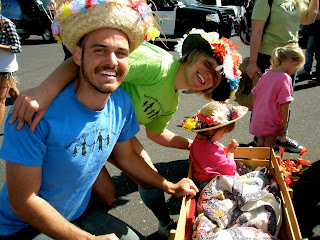 Later in the week, Ediza did some gold panning on a preschool field trip followed by an early Mother's Day lunch at a nearby tea house. The next day we marched with her preschool in the Mother Lode Round-Up Parade, where we all got dressed up in crazy hats.

This coming weekend is the Jumping Frog Jubilee in Angels Camp. It's my latest Travel article for the L.A. Times. Check out "Calaveras County: Still hopping to it" at travel.latimes.com. You never know what you'll find in Angels Camp (here's a frog decorated like a disco ball, for example). 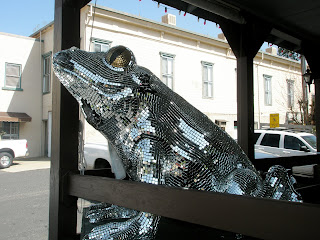 Posted by The Morris Family at 7:40 PM No comments: