On Friday, the first day of spring, Ediza received her first haircut. She got her bangs and some curls trimmed at the place where Amber gets her hair done. 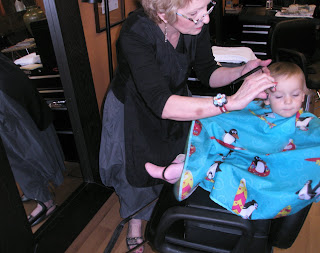 The next day we all went to a wedding. Amber and I have been to a variety of weddings (including one overlooking the Pacific Ocean and another at a Christmas tree farm) and this one was right up there as far as originality goes. They were married at a lake and the reception followed in their yurt. In the past, we had researched getting a yurt. Being inside of this one, which had a kitchen and bathroom, made us again interested in making one our home someday.

Waking up the next morning we were surprised by some of the largest snowflakes I've ever seen (and later that day we were caught in a brief snow and hailstorm whiteout). What made it so surprising was that we had been enjoying such nice spring-like weather and just the day before we saw hillsides blazed with bright orange California poppies. Looking out the window now, seeing frost on the ground and on the llamas backs, it appears as if Old Man Winter hasn't called it quits yet.
Posted by The Morris Family at 7:49 AM No comments: 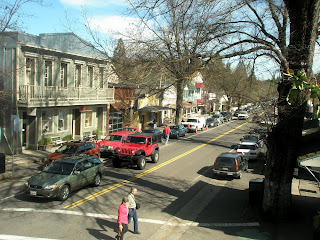 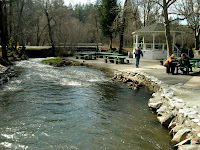 My new L.A. Times article -- "Murphys rings in St. Patrick's Day with green wine" -- is now online at travel.latimes.com (it will also be in Sunday's Travel section). Murphys is a cool little town that's a short drive from us in Sonora. We plan on making that drive Tuesday to celebrate St. Patrick's Day in true Irish style!
Posted by The Morris Family at 8:13 AM 1 comment:

The other day I was cleaning off a book shelf when I found an old journal of mine from when I studied abroad in Australia back in 2001. Before these handy little blogs came about I used to write about my travels in a little notebook (and I guess I still do). Reading over what I wrote provided glimpses into that time of my life: scuba diving in the Great Barrier Reef, camping in the rainforest, dancing with friends until dawn, living overseas during 9/11.

I also used the book to take notes during some classes, which included an Aboriginal studies course and Spiritual Well Being. The latter class was unlike any other college course I've ever taken. We would spread out on the floor and the teacher would lead us through guided meditations. (Keep in mind, the university I was at was just outside of progressive Byron Bay). Notes from my final lecture of Spiritual Well Being on Oct. 24, 2001: "Radical forgiveness calls upon the highest human virtues. You can forgive anyone for anything because that person taught you a lesson and made you who you are today. Nothing is wrong so there's nothing to forgive."

I passed all my classes with high marks despite taking off a few weeks in the middle of the semester for a trip to southeast Asia. My journal entries from Asia include practicing yoga at the airport in Singapore, drinking beer out of teacups in Bangkok and trying to communicate with a Buddhist monk.

On my way back to the states I took a monthlong detour in New Zealand and spent a week in Fiji. I stayed with a Samoan family in Auckland for a week before heading to a rural area to work in a greenhouse picking cherry tomatoes. Each morning I would sit on a skateboard and make my way up and down rows of tomatoes, picking and trimming them to the tune of the Rolling Stones' "Brown Sugar." After working there a few weeks, I went almost two years before eating another cherry tomato!

What a different (and even more incredible) experience returning to New Zealand seven years later with my family. I guess I'm posting this because it reminds me how fun and important travel is. It also reminds me that you never truly know where life will lead you. That's the beauty of it.
Posted by The Morris Family at 8:11 AM 1 comment: