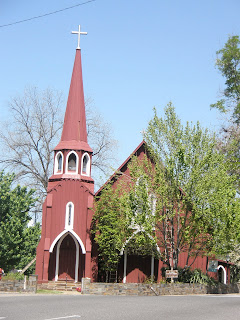 I've written travel articles about the East Coast, India and beyond, but I just had to travel down the road to write my latest one -- Weekend Escape: Sonora, Calif.'s antiques, eateries and train ride.

This picture is of "The Red Church," at the northern end of Washington Street in downtown Sonora. We've been bad with not taking pics at recent events, including bringing llamas to Sierra Earth Fest in Groveland last week and Amber skating with the Hellcats at the Tuolumne Lumber Jubilee this morning. At that event, Ediza got to sit in a convertible and throw candy to parade spectators:)

Posted by The Morris Family at 8:00 PM No comments:

Wanted to share some pics from the past month's happenings. We started it off with the May Day festival at Ediza's school. Her class got to spread rose petals on the ground before the eighth graders performed their dance around the maypole. 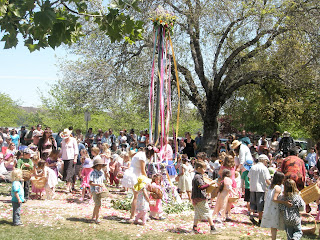 That was followed by the Mother Lode Round-up Parade, where Amber skated with the Hellcats (and the following week her team crushed the Tahoe Derby Dames). 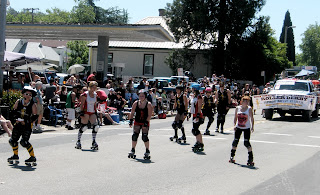 In other sport news, the Amgen Tour of California, a huge professional cycling race, came through town and I got to see the procession on one of my regular runs to the end of our road. 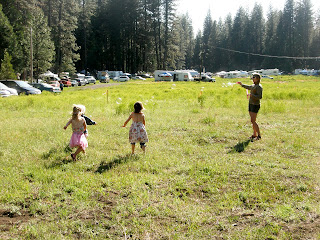 I replaced running with partying during another fabulous Strawberry Music Festival. Here's a photo of Ediza and her friends chasing after bubbles at the beginning of the festival. Musical highlights were Brown Bird and Trampled by Turtles on opening night, headliners Joan Osborne and Alison Krauss and newcomers the Wheeler Brothers. 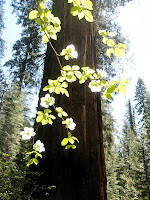 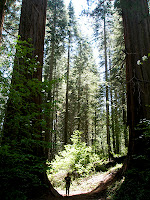 And just Wednesday we celebrated our sixth wedding anniversary with a walk among some giant sequoias in Yosemite. Here's Amber with two colossal trees (and some delicate dogwoods) in the Merced Grove of Giant Sequoias.

Posted by The Morris Family at 2:58 PM No comments: