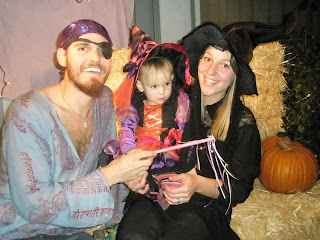 This Halloween Amber and Ediza were a pair of witches while I was some sort of disco-hippie pirate.

We started the day with Ediza's usual Friday morning singalong and ended it with singing around a bonfire at an elaborate Halloween festival put on by the Sierra Waldorf School.

Before we left, Ediza posed with the massive 26-pound pumpkin she picked out a few weeks ago at a nearby apple farm. 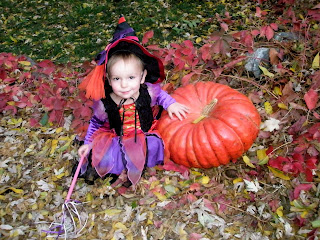 Posted by The Morris Family at 2:01 PM 3 comments: 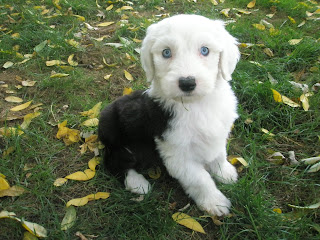 Last year for Ediza's birthday we got her a Lavender Lab, a stuffed puppy filled with lavender. This year we got her the real thing!

Meet Maggie, an Old English Sheepdog who joined our family this weekend. Maggie was born seven weeks ago at Rainbow's End, another group home for the developmentally disabled. Her parents are Babs and Buster and she has six brothers -- that's right, she was the only girl in the litter.

While Maggie's name is technically short for Magnolia, Ediza still seems to like the name Draw. As you can see from the photo, Maggie has a white face, blue eyes and she's very tiny -- at least for now.

I guess potty training a toddler wasn't challenging enough so now we've added housebreaking a puppy. Finally, they both fell asleep this afternoon at the same time! 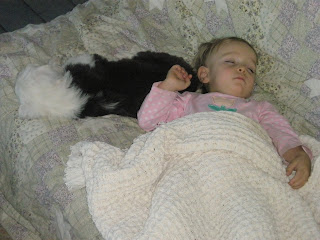 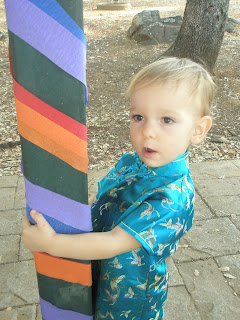 Ediza celebrated her second birthday with an around-the-world themed party at a nearby playground. The celebration was inspired by all of the great children's birthday parties we witnessed in Amsterdam's Vondelpark.

For Ediza's party, guests were sent invitations that resembled an airplane boarding pass.

Those attending the party (like Amber's mom below) were encouraged to wear ethnic clothing. I wore a shirt from Peru, Amber wore a dress she got in Paris and Ediza wore a Chinese dress we bought her at Silk Alley in Beijing. 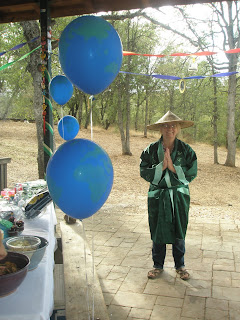 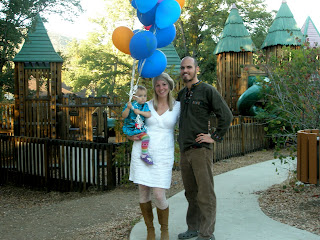 Amber made some neat decorations using construction paper, glitter and photos from old National Geographic magazines. Globe balloons, world maps and postcards from our trip were among the other decorations. 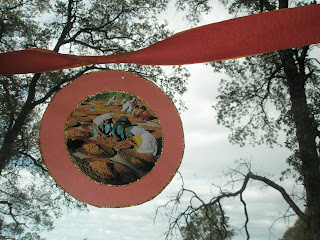 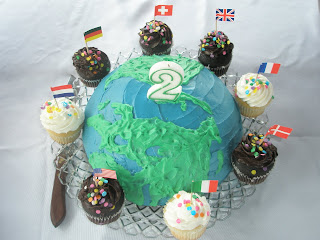 As for the food, there was hummus and vegetables for Greece, pizza for Italy and eggrolls and fortune cookies for China (ironically, the latter came from a Chinese restaurant called the "Great Wall.") To top off the meal there was a homemade globe cake alongside cupcakes and French truffles with miniature flags from countries around the world.

Party favor bags had stickers on them with sayings like, "See the World" and "Travel Light." They were filled with crayons, rainbow-colored bubbles, lollipops and globe bouncy balls. Ediza's goodies included a tiara, hot pink Crocs and a fancy tricycle. Today Ediza has been talking about riding her new trike "back to China." 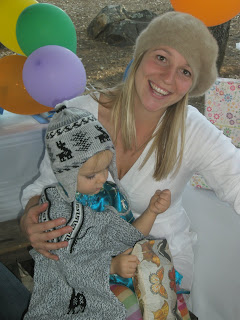 Last year Ediza celebrated her first birthday with an elaborate outdoor tea party. This year she traveled the world and partied at a playground. Wonder what next year will bring?
Posted by The Morris Family at 9:32 AM 1 comment: