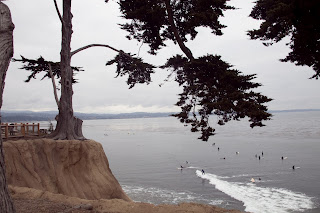 We spent last weekend on a family getaway to the coast, where we stayed at a beach bungalow in Santa Cruz. Above are some surfers just down the street from where we stayed.

Below is Amber, Ediza and Sheridan (the Australian exchange student we're hosting) walking to breakfast. We ate inside of a yellow van at a place called Paula's (I know, only in Santa Cruz). 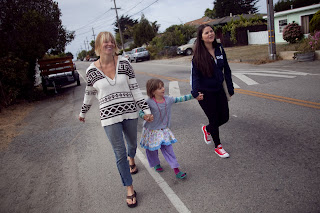 The reason we were in town was to cheer on Amber, who played roller derby against the Santa Cruz Harbor Hellcats. It was her team — the High Country Hellcats — who won the cat fight. They take their derby seriously in Santa Cruz (their players are even on trading cards). 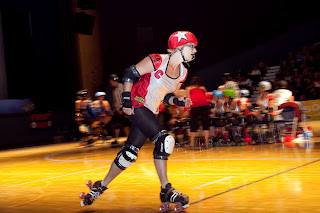 While Amber warmed up, we hung out in downtown Santa Cruz.

Thanks again to Sarabek Images for the pics! 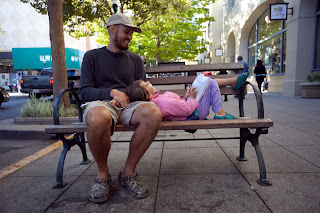 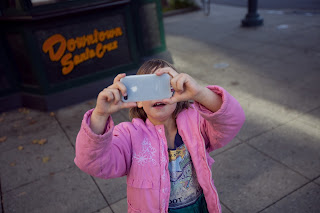 Posted by The Morris Family at 7:51 PM No comments:

City by the Bay 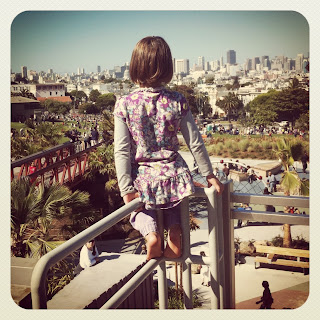 So we traded in the big mountains for the big city and spent last weekend in San Francisco. I ran a marathon around the entire city and as a family we explored different parts in between.

We were lucky enough to stay at our friends place next to Golden Gate Park. After some sightseeing on Saturday, I had to be at the starting line at 5:30 a.m. Sunday (this required getting up at 3:30 in order to catch two public buses).

With Journey's "Don't Stop Believin'" blaring on the speakers, thousands of us took off into the dark city streets. The marathon route showed off classic San Francisco — running past the bakers making sourdough bread on Fisherman's Wharf, then across a foggy Golden Gate Bridge and onto other famous sites, including funky Haight Street.

Eventually the course looped its way back to the Embarcadero. At the finish line, there was a Sierra Nevada Brewing Co. beer garden and I was given two medals — one for the SF Marathon and another for completing the LA and SF marathons in the same year.

We met up with longtime friend Sarabek Images for lunch, shopping and a trip to Dolores Park, where Ediza got an awesome view of the city perched above the playground's slide (in the photo above). Here she is on her way down... 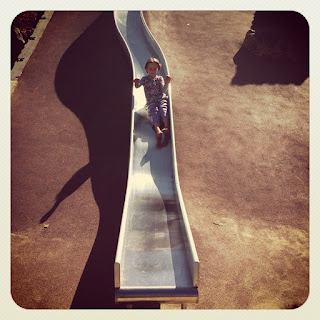 Posted by The Morris Family at 8:58 AM No comments: